Saint of the Week: Thomas More 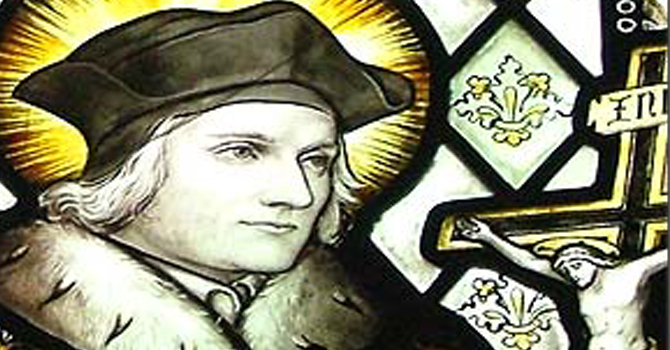 Thomas More was an English lawyer and statesman who was beheaded in 1535 because he chose loyalty to the Pope over submission to his King. As he said to his daughter when she visited him in prison: “God’s grace hath strengthened me hitherto and made me content in my heart to lose goods, land, and life too, rather than to swear against my conscience.”

For almost twenty years More had enjoyed brilliant success in law and politics. He entered the House of Commons and made a name for himself as a critic of royal policies. He was hailed for the learning and wit he displayed in his writing and conversation; and it was well known that he observed a constant round of intense prayer and strict fasting in his private life.

More sided with those who defended the claims of the Pope and resigned as Lord Chancellor. He retired into private life, but his international fame was so great that the King demanded his public support. When More refused to swear an oath which violated his convictions, the King had him tried on a charge of high treason and sentenced to death. As he stood on the scaffold, More said: “I die the King’s good servant, but God’s first.”