NEWS ALERT Pastoral Letter from The Bishop of New Westminster: The Discovery at Kamloops 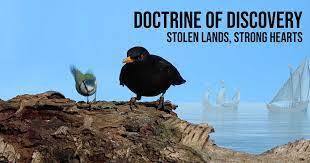 Join us June 13 on Zoom from 12-2pm as we screen the movie "The Doctrine of Discovery: Stolen Land, Strong Hearts" followed by discussion.

“Doctrine of Discovery: Stolen lands, Strong Hearts” is a film about a devastating decision, made over 500 years ago, which continues to profoundly impact Indigenous and Settler people worldwide. Pope Alexander VI ruled that the lands being discovered by European explorers at the time was “empty” land and its millions of Indigenous inhabitants were “non-human”.

Click here to register for the June 13 Movie screening

Pastoral Letter from The Bishop of New Westminster: The Discovery at Kamloops A Letter from The Primate: Every Child Matters A Word From the Vicar: Indigenous History Month