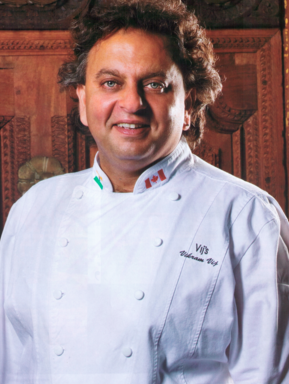 Vikram Vij joins Art & Spirit to share the creative experience of preparing and serving that which sustains life and delights the senses in his culinary art.

Vikram Vij is the owner of award-winning restaurants Vij’s Restaurant, Vij’s Rangoli, and My Shanti, and food truck Vij’s Railway Express. Vij is also the creator of Vij’s At Home, a line of prepackaged gourmet curries that are cooked by hand in Surrey, BC, and sold in over 300 locations across Canada.

Vij was the first Indo-Canadian Dragon on CBC’s Dragons’ Den. He appeared as a judge on CBC’s Recipe to Riches and a guest judge on Top Chef Canada and Chopped Canada. In March 2013, he hosted the world’s first ever live-streamed cook-along, Cook Live With Vikram Vij.

Born in India in 1964 and raised in New Delhi and Bombay for the next 20 years, Chef Vikram Vij is a transplanted native son. He began cooking when he was only 10 years old (for his mother and friends at tea), but Chef Vij took his chops pro when he studied Hotel Management in Austria. After working in Salzburg and Vienna for a few years, Vij made the trans-hemispheric move to Canada to work at the Banff Springs Hotel in Alberta. In 1994, the then 30-year-old chef opened his namesake fine-dining restaurant, Vij’s, in Vancouver, and was soon joined by his wife, Meeru Dhalwala.

With the success of Vij’s, chef and wife felt confident enough to open their second outpost, the more informal, home-style, Rangoli, in 2004. A certified sommelier, Chef Vij has a very strong presence in the front of house at both establishments. And his forthcoming line of gourmet packaged curries has recently moved to an external facility in Surrey, British Columbia.

When he’s not overseeing these operations or writing award winning cookbooks (Vij’s: Elegant and Inspired Indian Cuisine and Vij’s at Home: Relax, Honey), Vij is making bold wine choices (he likes to find culinary matches for big flavor, difficult-to-pair reds) and maintains active membership in the Chef’s Table Society of British Columbia, which is dedicated to supporting innovative and sustainable food programs involving chefs, producers, and other local industry groups.

In addition to working with Meeru on menu planning for both restaurants, Vikram runs the “front of the house” at both Vij’s and Rangoli. Vikram’s recent big focus has been to set up a production facility in Surrey, BC to prepare Vij’s packaged gourmet curries, which are cooked by hand and are original popular recipes from Vij’s. Vij opened his first solo restaurant, My Shanti, based in South Surrey, in 2014. My Shanti means "my peace" and the menu is based on Vij's culinary travels, and includes flavours, ingredients and influences from all over the world.

Vij and Dhalwala's culinary philosophy has been described as "keeping spices and cooking techniques Indian, while using meats, seafood and produce that are locally available." Vij has asserted that their cuisine should not be labeled fusion cuisine as the techniques and spices used are traditional to India. Vij and Dhalwala advocate sustainability in their kitchen practices and ingredient selection. Two of their restaurants are known to have an all female kitchen staff.


Vij married Dhalwala on December 24, 1994. Dhalwala was born in India but grew up in Washington, D.C. Vij and Dhalwala were introduced by their mothers who were old friends. They have two daughters, and live in Vancouver, British Columbia.
Notable career milestones

Vij's Restaurant was one of the twenty featured restaurants at the James Beard Annual Gala Awards 1998, in New York City, and was invited to prepare dinner at the James Beard House. In 2001, Vij was invited to be a member of the prestigious gastronomic society Confrérie de la Chaîne des Rôtisseurs. In April 2012, Vij participated in the second annual Varli Food Festival at the Metropolitan Pavilion in Manhattan's Chelsea neighborhood, which was hosted by Top Chef's Padma Lakshmi and Indian celebrity chef Sanjeev Kapoor. More than 2,000 attended the festival to sample cuisine from the 60 high-profile Indian chefs including Vij.

Vij's Restaurant has been featured in a variety of North American television broadcasts and publications, including Food Network Canada, CNN, The Globe and Mail, The New York Times, The Washington Post, Travel + Leisure, Food & Wine, Bon Appétit, Sunset magazine, and Art Culinaire. Omni Television made a documentary titled A Day In The Life of… Vij's, giving an intimate portrait of Vij and Dhalwala, and a behind the scene look at Vij's Restaurant. Vij was featured on At the Table With, a Food Network Canada series, in 2008. The same year Vij's Rangoli was a subject of Anthony Bourdain's No Reservations. Vij made his famous lamb popsicles for Giada De Laurentiis when she visited Vij's Restaurant on her Food Network series Giada's Weekend Getaways. Vij was a guest judge on Top Chef Canada in 2011, and was invited back for the 2012 season. He was also the guest of honour in a 2013 Top Chef Canada episode dedicated to Indian cuisine. That episode also featured the Vij's At Home packaged foods, which were sampled by the contestants. He was also a judge on the first ever Chopped Canada show, which premiered on Food Network Canada in January 2014 and he appeared weekly on CBC's Recipe to Riches, which began in February 2014.

In June 2011, the BC Food Processors Association honoured Vij with the Rising Star Award. Vij's Railway Express, based on the chef's travels by rail throughout India, was awarded the inaugural People's Choice Award from Air Canada's enRoute Magazine, as Canada's Best New Restaurant in 2013.

In March 2013, Vij hosted the world's first ever live-streamed cook-along, Cook Live With Vikram Vij.As part of Vij's goal, to make Indian cuisine accessible to all, people were encouraged to join him live online and cook a family meal at the same time, taking instruction from an award-winning chef. They were able to Tweet questions and photos as the curry was being prepared.

My Shanti was listed as number one in the Globe and Mail's Top 10 New Vancouver Restaurants of 2014 and one of the Vancouver Sun's Best New Restaurants for 2014.

Within weeks of opening, My Shanti received a nomination from Air Canada's enRoute Magazine as one of Canada's Best New Restaurants. It is the second year in a row a Vij's establishment has been nominated, having won the People's Choice award in 2013 with Vij's Railway Express.

In October 2014, Vij made his debut as a Dragon on CBC's Dragons' Den and departed at the end of the season. He took his place in the Den alongside entrepreneurs Jim Treliving, Arlene Dickinson, David Chilton and Michael Wekerle.

In June 2015, Vikram Vij and Meeru Dhalwala were both awarded honorary Doctorates of Law by Simon Fraser University.

A Word from the Vicar: A Call to Pray for Lambeth 2022