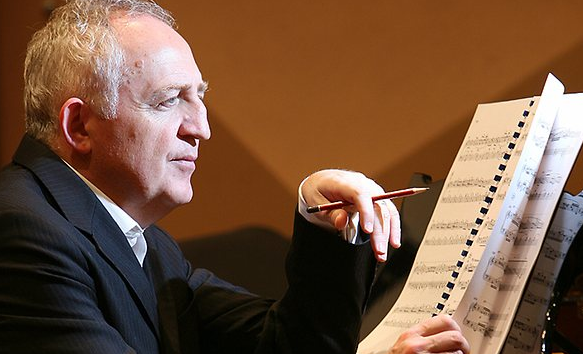 Bramwell Tovey joins Art & Spirit to share his experience of the upwelling of creative art in the conducting of an orchestra.

Grammy® and Juno® award-winning conductor/composer Bramwell Tovey was appointed Music Director of the Vancouver Symphony Orchestra in 2000. Under his leadership the VSO has toured to China, Korea, across Canada and the United States. Mr. Tovey is also the Artistic Adviser of the VSO School of Music, a state-of-the-art facility and recital hall next to the Orpheum, the VSO’s historic home. His tenure has included complete symphony cycles of Beethoven, Mahler, Brahms as well as the establishment of an annual festival dedicated to contemporary music. In 2018, the VSO’s centenary year, he will become the orchestra’s Music Director Emeritus.

During the 15/16 season Mr. Tovey’s guest appearances include the symphonies of Montreal, Melbourne, New Zealand, and Pacific Symphony, and the Philadelphia Orchestra and New York Philharmonic, reprising his programs with both at Bravo! Vail in summer 2016. The summer also includes returns to the Blossom Music Center, Ravinia Festival, and Hollywood Bowl. In the winter of 2016 he will conduct Korngold's Die tote Stadt with Calgary Opera.

In the 14/15 season Mr. Tovey made guest appearances with several US orchestras. In Europe he performed with the BBC Philharmonic and the Helsingborgs Symfoniorkester and he traveled to Australia on two separate occasions for engagements with the symphonies of Melbourne and Sydney.

In 2003 Bramwell Tovey won the Juno® Award for Best Classical Composition for his choral and brass work Requiem for a Charred Skull. Commissions include the New York and Los Angeles Philharmonics, the Toronto Symphony and Calgary Opera who premiered his first full length opera The Inventor in 2011. A recording of the work by the VSO with UBC Opera and the original cast was made for the Naxos label and will be released this season. In 2014 his trumpet concerto, Songs of the Paradise Saloon, was performed by the LA Philharmonic and the Philadelphia Orchestra, both with Alison Balsom as soloist.

A talented pianist as well as conductor and composer, he has appeared as soloist with many major orchestras, including his own Pictures in the Smoke with the Melbourne and Helsingborg Symphonies and the Royal Philharmonic.

Mr. Tovey is a Fellow of the Royal Academy of Music in London, the Royal Conservatory of Music in Toronto and holds honorary degrees from the universities of British Columbia, Manitoba, Kwantlen and Winnipeg. In 2013 he was appointed an honorary Officer of the Order of Canada for services to music.

A Word from the Vicar: A Call to Pray for Lambeth 2022